THE CANBERRA THAT COULD HAVE BEEN
​SAT 18 APR @ 2PM | Theatrette | $12/$10 | 60 mins
In 1916, Walter Scott Griffiths gave a series of illuminated lectures examining and critiquing Walter Burley Griffin's design for the city of Canberra.
Griffiths, a survey draftsperson and town planner, had a longstanding interest in the development of Canberra. In 1911, together with Robert Charles Coulter and Charles Henry Caswell, he had entered the Federal Capital City Design Competition. Their competition entry placed fourth, however the government purchased the design and adopted their plan for Canberra's drainage and sewerage.
Griffiths maintained his passionate interest in the design and construction of Canberra and over the years made several presentations of the subject. By using a set of 24 glass lantern sldes, containing detailed architectural drawings in his presentation, Griffiths was able to project his design for Canberra onto a sceen for his audience, allowing him to compare and contrast his ideas with those of Walter Burley Griffin's.
The NFSA has acquired Griffith's lantern slides, so come join us for a conversation with NFSA Curato Tamara Osicka and Canberra historian David Headon about these intriguing items from the collection. 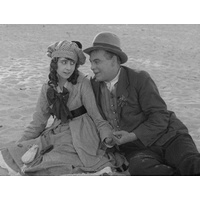