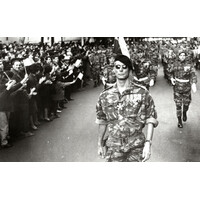 One of the most influential political films of history, Pontecorvo’s film vividly recreates a key year in the tumultuous Algerian struggle for independence. Shot in the style of a documentary, this film is a case study in modern  warfare, with its terrorist attacks and the brutal methods to combat them.

The strength of "The Battle of Algiers,"  is that it is lucid and dispassionate in its examination of the tactics of both sides – Roger Ebert